Socio-Legal Review (SLR) is a bi-annual, open access, student-edited, peer-reviewed interdisciplinary journal run by the students of National Law School of India University, Bangalore, and published by the Eastern Book Company (EBC). With respect to our mandate, we subscribe to an expansive view on the interpretation of “law and society” in South Asia, inviting articles with a perceived link between law and social sciences. First published in 2005 with the help of a grant from the Modern Law Review, SLR has carried articles by luminaries in the legal and social fields, including Roger Cotterrell, W.T. Murphy, Werner Menski, Asghar Ali Engineer, Pratiksha Baxi and Gina Heathcote.

SLR has also been cited by the Supreme Court of India multiple times. The article ‘Identity and Identification: The Individual in the Time of Networked Governance,’ Nishant Shah, Vol. 11(2) Socio-Legal Review, (2015) has been cited in Justice Chandrachud’s opinion in Justice KS Puttaswamy and Anr v. Union of India and Ors (2018). SLR has also been cited by Justice Indu Malhotra and Justice Chandrachud in their respective opinions in Joseph Shine v. Union of India (2018). The article cited is ‘The Good, the Bad, and the Adulterous: Criminal Law and Adultery in India’, Abhinav Sekri, Vol. 10(1) Socio-Legal Review, (2014).

Separation of powers is understood as the diffusion of powers among different branches of the government, with each branch acting as a check on the other. This principle is considered an anti-thesis to totalitarianism, preventing the absolute concentration of power and thus protecting liberty. The Cabinet-style parliamentary form of government, with its genesis in Britain, fused together the executive with the legislature. This resulted in powerful executives and weakened legislatures with limited oversight capabilities. As institutions evolved over time, internal rules and procedures also evolved both as constraints and enablers of executive dominance, by distributing the powers of agenda control. Agenda control, understood as the power to decide what gets on the agenda, is a contested notion between the executive and the legislature. While there have been studies exploring agenda control in the context of the United States Congress and parliaments in several European countries, a similar study in the context of the Indian Parliament is yet to emerge. This paper attempts to examine the rules and procedures of the Indian Parliament to determine who controls the agenda, and what impact this control has on the oversight function of Parliament. For this purpose, the paper will limit itself to procedures pertaining to convening and proroguing a session, deciding the time and agenda for legislative discourse, and controlling deliberations on financial matters. The paper ends by making some recommendations on the reform of these rules and procedures, so as to ensure a greater sharing of the power of agenda control between the executive and the legislature in India.

The Majesty and Dignity of Courts: Changes in Court Dynamics with the Onset of the Covid-19 Pandemic in India
Rahela Khorakiwala

The procedures and practices of courts were brought to a sudden halt with the onset of the Covid-19 pandemic. This led to the promulgation of virtual courts where previously known traditions of the courts changed in many ways. The dress code was watered down and the understanding of the majesty and dignity of courts had to be re-established. This paper documents the seismic changes that occurred in virtual courts and how the courts had to keep redefining what contempt meant in the context of virtual courts. It is argued that majesty and theatrics affect the dispensation of justice, so when it is slightly ‘lowered’ – as was during the pandemic – the seriousness of the justice process is also scrutinised. The question remains as to whether timing, manner, and presentation are still relevant in times of Covid-19. The paper begins with a theoretical explanation of the majesty and dignity of courts in the pre-pandemic era. The next two sections illustrate the theatre of the court, pre-Covid-19 and during Covid19. The following section is an ethnographic account of the redefining of majesty and dignity in virtual courts. The conclusion discusses the effect of the pandemic on the re-imagining of the spatial dynamics of courts in India.

This paper focuses on law and housing discrimination within the context of a sociological understanding of the cumulative disadvantageous effects of what are legally considered ‘private acts’. It therefore brings a distinct perspective to the examination of vertical versus horizontal rights. The paper particularly focuses on housing discrimination against Muslims in urban areas against the background of marginalisation, conflict, and violence. It seeks to think about housing segregation as both producing discrimination, targeted violence, economic inequality, and social exclusion as well as itself being a product of these factors. Public policy in the form of equal opportunities legislation has been the chosen instrument for tackling similar racial and ethnic discrimination in several countries worldwide. This paper argues that public activism could be significant in embedding values socially and making durable the legislation arising there from. At the same time, it calls on the notion of demosprudence to contend that in the context of deep-rooted structured inequalities, as the history of the US civil rights movement also shows, a primary judicial step triggered by the mechanism of social action litigation may be necessary.

Note From The Field

Living By Religion, Playing by Law: Early Glimpses of The Ban On Triple Talaq
Kalindi Kokal

The Supreme Court of India declared triple talaq, a type of Islamic divorce, as unconstitutional in 2017. Following that, in 2019, the Parliament enacted the Muslim Women (Protection of Rights on Marriage) Act, 2019, which criminalised the pronouncement of triple talaq. Triple talaq as a form of divorce continues to hold legitimacy under the uncodified religious law that Muslims in India abide by in their everyday life. What, then, is the impact of the criminalisation of this practice at the level of the community? What does intervention by the criminal justice system mean for justice in inter-personal disputes that are primarily of civil nature? The paper explores how disputes involving the question of triple talaq unfold in police stations, which are the first State institutions that take cognisance of the offence, to examine the value of criminal deterrence for offences related to domestic disputes. 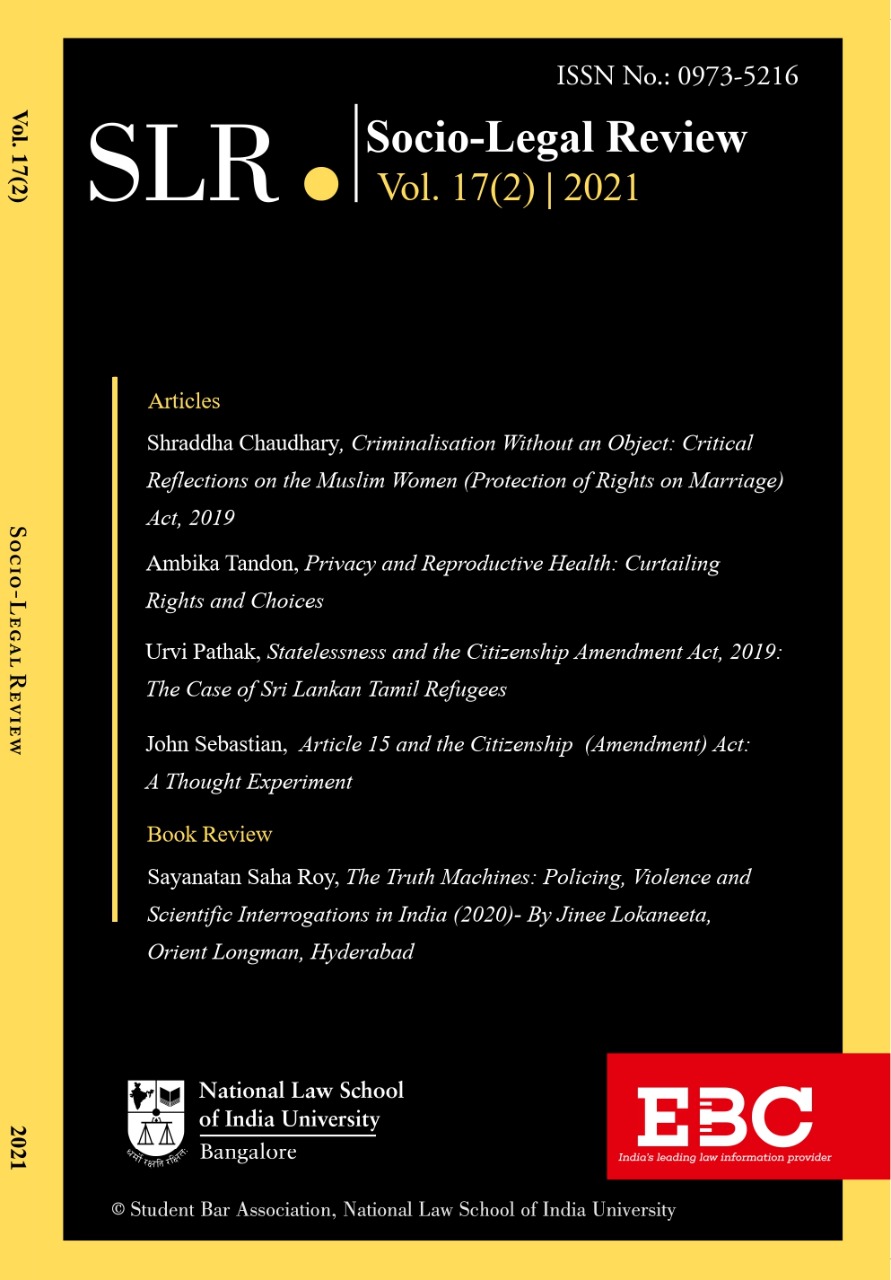